Top Things to do in Wimborne Minster

10 Things to Do in Wimborne Minster That You Shouldn't Miss

Wimborne Minster (often referred to as Wimborne, /ˈwɪmbɔːrn/) is a market town in East Dorset in South West England, and the name of the Church of England church in that town. According to Office for National Statistics data the population of the Wimborne Minster built-up area as of 2014 is estimated as 15,552 inhabitants and is situated at the confluence of the River Stour and River Allen, 5 miles (8 km) north of Poole, on the Dorset Heaths. The town is also recognised as part of the South East Dorset conurbation.
Restaurants in Wimborne Minster

Sunday evening in Wimborne, never been to this theatre before, parked down the street as don’t think they have a car park.
Had something to eat & drink opposite in the man in the wall pub, then I was quite surprised to have my handbag searched, 4 doormen on the theatre door in what appeared to be a quaint rural Dorset town.. checking bags, I thought this was odd as the theatre is so small.. so they have trouble here I wondered?!
We went to the bar & ordered some drinks, a couple of minutes later the bell rang to be seated, we went to walk in only to be told we couldn’t take our drinks in with us... but the lady at the bar just poured my husband a large glass of wine that was supposed to last him till the interval... she could have told us we can’t take them in???
This is where it now makes sense about the doormen.. not for protection but to stop you smuggling your own drinks in.. so you’re allowed to take soft drinks & snacks in but no alcohol, for this reason alone I won’t return, building is very old, toilets need a refurb!
At least the performance by Jason Manford was good! 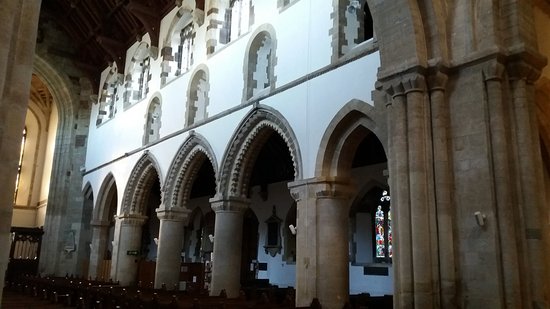 This building has been a center of prayer since its establishment as a Benedictine nunnery in 705AD. It contains the Chained Library, which is one of the UK's first lending Libraries.

Placed in the middle of this pretty little market town sits The Minster, it's very attractive from the outside, with its lovely local stone. Inside it is also very attractive, with lots of interesting features, turned into a game for the children to hunt certain things out. Not as impressive as some of the other Minsters in Britain, but very well worth a visit in it's own right. 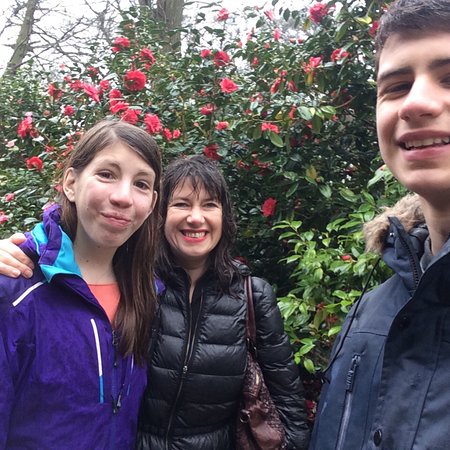 Visited on Mothers Day with a morning entry ticket for 11.30am. Interesting rooms and knowledgable guides in each room. Artifacts and art were easy to see. Particular mention for the Spanish room with amazing tooled leather wall coverings.
Followed the tour with lunch in the stables and a walk round the grounds to the fernery, the camelia walk and the woodland with snowdrops and daffodils.
Bought some snowdrops and tete-a-tete daffodils for the garden. A super experience for mum and for us. 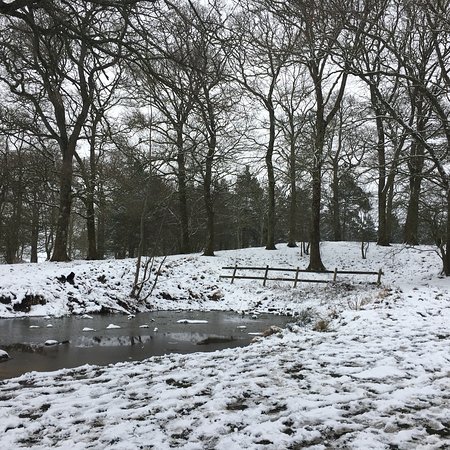 If you get the chance to visit this important monument do: impressive remnants of a place once of major significance so long ago & for so long. Plenty of walking opportunities, viewpoints and a most beautiful road leading to it 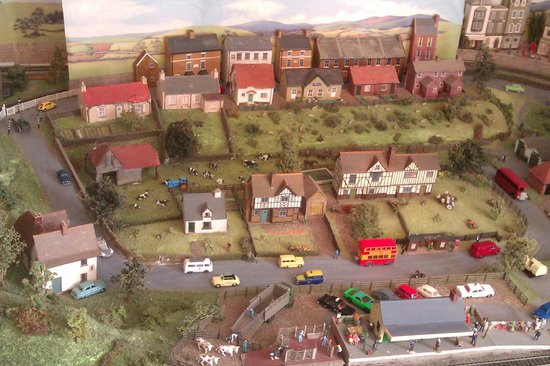 We walked up at 16.15 on a Wednesday afternoon, the poster advertises last entry at 16.30 and close at 17.00. Woman in the ticket window was busy Reading her book, looked up, looked at the clock, said "it closes at 5, not really time". She really didn't want us in and wasn't really interested in taking our £13.00 so we left.
It's a shame as I'd expect somewhere coming to the end of it's season to want some trade but who am I to know. 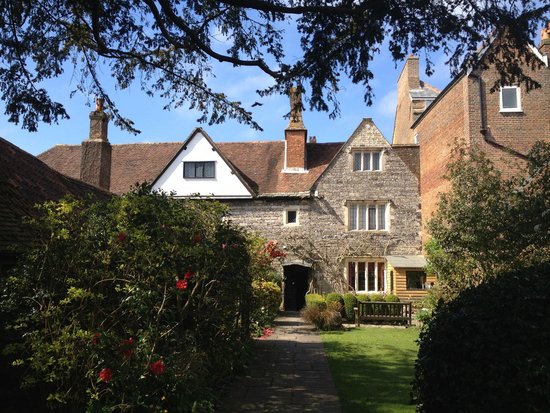 What a perfect little place, and I can't imagine why I've never visited before. I went with Mum in her wheelchair and it's quite possible to visit all the fascinating rooms downstairs (upstairs, not possible) and the very beautiful garden that is tended by obviously knowledgeable and keen volunteers. Excellent café with good cream tea. Only plus that could be added - Priest's house home made jam?
The museum is fascinating and is a good accessible insight into how people lived and worked without everything we take for granted . . . take the kids and show them the kitchen exhibits! 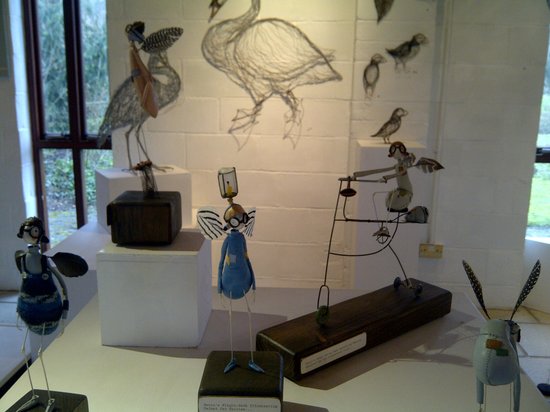 Walford Mill Crafts welcomes you to the beautiful listed Mill building on the outskirts of Wimborne town centre. Here you can enjoy a wonderful display of contemporary crafts from local and national makers, leading Exhibitions and the Millstream Café. A visit to Walford Mill Crafts will be relaxing, enjoyable and inspirational.

This lovely place is full of wonderful treasures. We bought a couple of bits and had a great conversation with Robin, one of the resident artists there who creates brilliant prints by hand. The staff were also all really friendly and helpful, and the 'By the Sea' exhibition was a real highlight with some really brilliant works of art. The glass panels showing the river beneath the building are a nice touch. The cafe is a separate business, but was worth a visit and had a nice range of lunches. 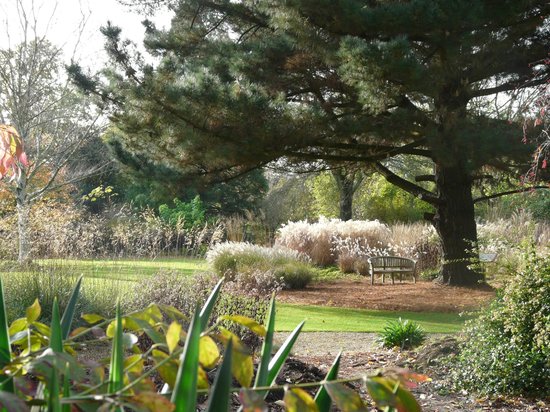 Knoll Gardens was just so peaceful today. It is such a relaxing garden to visit. Very quiet and pretty. The mature trees and the arrangement of the Gardens, and pathways are fabulous, with lots of very informal Seating areas are dotted around the place for peoples enjoyment. You you can sit and listen to the birds.
My husband and I only stayed a short while, but had time for a coffee in the refreshment area (which is based on folks honesty or so it seems in regard to paying for the self service vending machine) with lots of choice of coffee and soft drinks. We really enjoyed the informality of the place. Loved it. 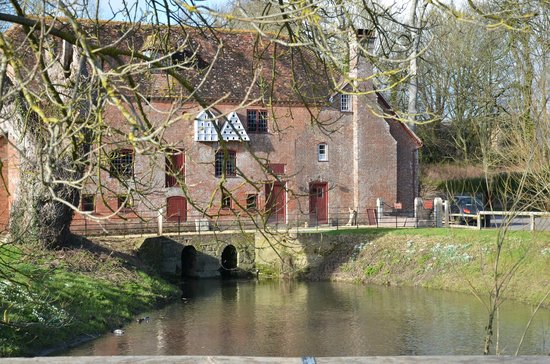 National Trust Property. Corn mill with original wooden machinery in a peaceful riverside setting. Open afternoons on Saturdays and Sundays only from Easter to October. Very informative guided visits and a lovely river location near the oldest bridge in Dorset.

As new members of the National Trust we decided to visit this mill again and as it was a few years since our last visit we accepted the offer of a guided tour. Paul our guide was excellent and knowledgable.
It is a great place to visit with lots of history and charm.
They have now installed some garden benches so you can sit right by the river and watch the swans. There is so much wildlife around the mill including grey heron, kingfisher, little egrets, swallows and much more.
You are invited to bring a picnic and the National Trust provide blankets which you can borrow. This is ideal on a sunny day as this is such an idyllic spot.

From carboot, to fresh fruit/vegetables/meats/eggs/cheeses, knitting supplies, to antiques and toys, to pet supplies and books, the Wimborne Market has everything under one roof.
If you like to look at everything, set aside 1-2 hours to take everything in. Food and drinks are also available to purchase inside the market. I loved it. I see some negative reviews on here but I do not understand them. I can’t imagine what someone was looking for that they didn’t find here. It’s a wonderful market with loads of friendly vendors. It is easy to find and well worth a trip to Wimborne.