10 Things to Do in Rovinj That You Shouldn't Miss

Rovinj-Rovigno (Croatian pronounced [rǒʋiːɲ]; Italian: Rovigno, Ancient Greek: Ρυγίνιον (Ryginion), Latin: Ruginium) is a city in Croatia situated on the north Adriatic Sea with a population of 14,294 (2011). Located on the western coast of the Istrian peninsula, it is a popular tourist resort and an active fishing port. Istriot, a Romance language once widely spoken in this part of Istria, is still spoken by some of the residents. The town is officially bilingual, Italian and Croatian, hence both town names are official and equal.
Restaurants in Rovinj 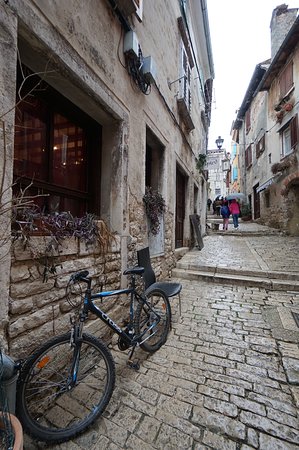 Reviewed By RICHARD B

...because of the ancient stone work, this charming Old Town is 10 degrees F hotter than any place within a mile away. Cobblestones have been tread upon for centuries which gives you an opportunity to slip and fall down on the steep, slippery streets. Caution. 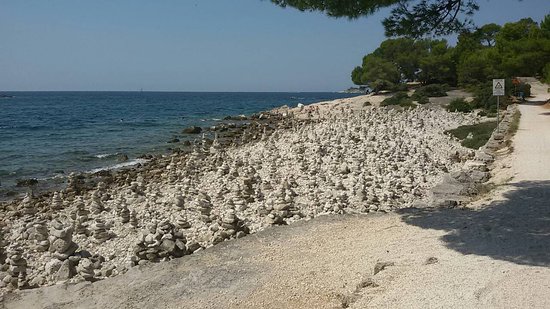 Golden Cape (Zlatni rt/Punta corrente), Kurent Bay and Montauro Cape are located around 1.5 km away from the town-center, south of the ACI Marina and Lone Bay.The coast is mostly rocky. There are a few Beaches covered with small round stones, and Kurent Bay, the most visited beach in this area, covered with gravel. Kurent Cape is on the eastern side (see map). The Beaches are rocky and the access to the sea is not easy. At Kurent Cape you will also find a pier where you can temporarily tie your boat and there is also a small gravel-covered bay.

Trails are very nice although so crowded in the afternoon that biking is a challenge. I would recommend going early or late in the day if you want to bike or run for exercise. There are "beaches" (large pebbles/rocks) where you need to pay for lounge chairs; some places are 100kn PER chair while others were 35kn. The expensive place - Mullini Beach - had no additional facilities - no one was serving drinks and there was no where to refill a water bottle or go to the bathroom, so you are really better off bringing a picnic and something to lie on and finding a free spot. 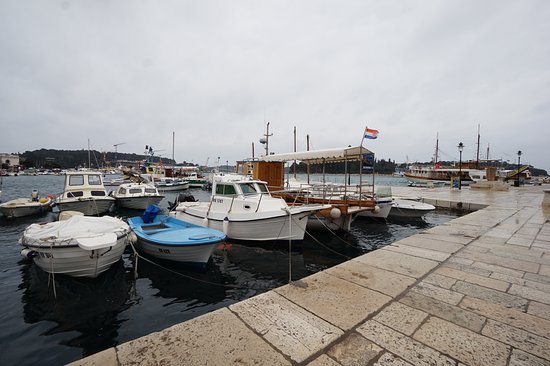 A pleasant port town in the northern Adriatic Sea with opportunities to explore vinyards, shops and Beaches.

A walk around the port is worth the trip to see what boat trips are available along with any coffee shops or restaurants.
We found a archway that lead to the street running behind the main port front that led to reasonable restaurants, pizza shop and pub.
The boats advertise where they go to and cost to visit.

We have visited here previously and always find the time to visit this wonderful part of Rovinj.With fantastic little bars,restaurants and the souvenir shops too,this main area of Rovinj was exceptionally quiet until around lunchtime when the town seemed to come to life.We were dressed in t-shirts and shorts in the 20 degree heat however the locals still donned their coats....we must stick out like a sore thumb.....this area is really worth a visit but as to be expected can be very busy. 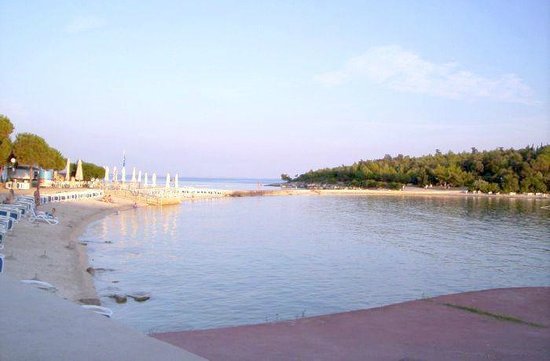 Island from Rovinj ten minutes boat ride. The return ticket is 40kn which is not expensive, because the island is beautiful. Selection and ordinary nudist beach. A large selection of restaurants and cafes. In addition to the sea and beautiful Beaches, you can swim in the hotel pool and if you're not a hotel guest. I urge the Red Island but Catherine.

The church is situated on top of a hill. The inside is very nice, beautiful but not over-the-top. When visiting, I strongly suggest climbing the bell tower. We actually had trouble finding where to start the climb. We looked inside the church, walked the perimeter and finally discovered the entrance inside the church on the left hand side near the altar. My fear of heights was severely tested on the climb! The stairs go round and round and the treads are old wooden slats that vary in width. They are open to below and it is very disorienting (especially when descending). However, it's worth every scary moment when you reach the top and see the views! 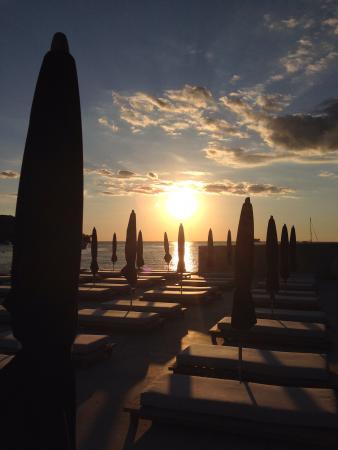 We were staying at the hotel and used the beach bar and Terrace every day.
The staff were great, really friendly and helpful.
Get there early...people start setting up their plot from 8am.
The hotel rents spaces to non-guests which is causing a bit of an issue with space. Speak to the staff, they will do everything to help you out.
The food is great and the booze very good too. Loved the local beers. 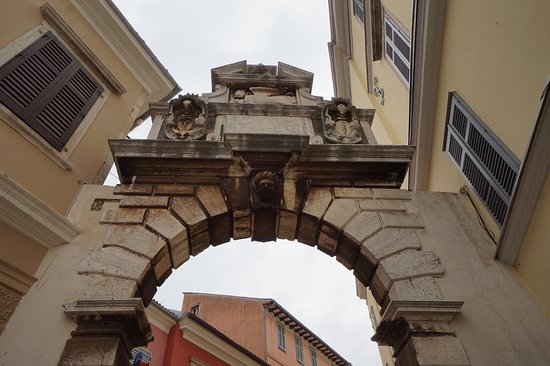 This Venetian arch is a grand entrance into the old town. It is decorated with the winged lion of Venice. A good photo opportunity. Follow the winding cobbled streets leading from the arch and explore this charming old town. Gaze in the windows of artisan or touristy shops and soak up the ambience at an open air cafe or bar. 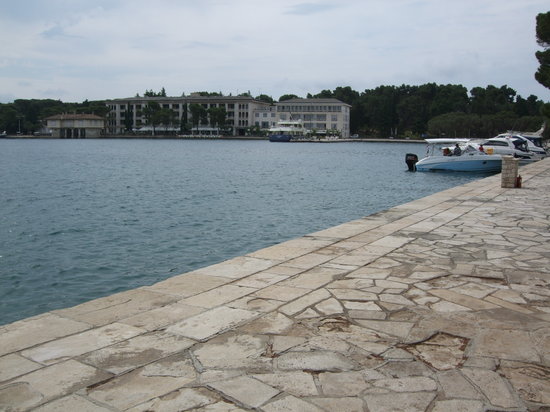 We were quite excited about this trip as we have been to numerous Islands up and down the coast of Croatia and enjoyed every one of them. Generally speaking reviews were good for the Brijuni Islands, with the history, the zoo, and the general scenery.
However, we were disappointed. Have to concur with an earlier review in commenting on the rudeness of the booking staff, who were at best abrupt and gave the distinct impression they were having a laugh at our expense. Maybe we shouldn't have gone on the official National Park trip, but the tourist train tour commentary while being very detailed was so repetitive and bordered on soporific. A bit of humour wouldn't have gone amiss.
Agree with previous comments re purchasing any necessities like water beforehand. 17 Kuna for a small bottle of water was pretty extortionate.
Had a feeling that it was past its best as a tourist attraction. Juraj and his family are a true istrian experience. Donkeys, dogs, a wonderful vineyard with even better view on Rovinj and Islands. He showed me his wine cellar and we drank fantastic wines. The taste of this wines is "the true istrian taste, like our grandfathers made wine" as he says. Stancija Collis is an honest istrian story.