10 Things to Do in Fort Bragg That You Shouldn't Miss

Fort Bragg, North Carolina is a military installation of the United States Army and is the largest military installation in the world (by population) with more than 50,000 active duty personnel. The installation is located within Cumberland, Hoke, Harnett, and Moore counties. The installation borders the towns of Fayetteville, Spring Lake, and Southern Pines. It was also a census-designated place in the 2000 census, during which a residential population of 29,183 was identified. It is named for Confederate General Braxton Bragg. It covers over 251 square miles (650 km). It is the home of the Army's XVIII Airborne Corps and is the headquarters of the United States Army Special Operations Command, which oversees the U.S. Army 1st Special Forces Command (Airborne) (Provisional) and 75th Ranger Regiment. It is also home to the U.S. Army Forces Command, U.S. Army Reserve Command, and Womack Army Medical Center. Fort Bragg maintains two airfields: Pope Field, where the United States Air Force stations global airlift and special operations assets as well as the Air Force Combat Control School, and Simmons Army Airfield, where Army aviation units support the needs of airborne and special operations forces on post.
Restaurants in Fort Bragg 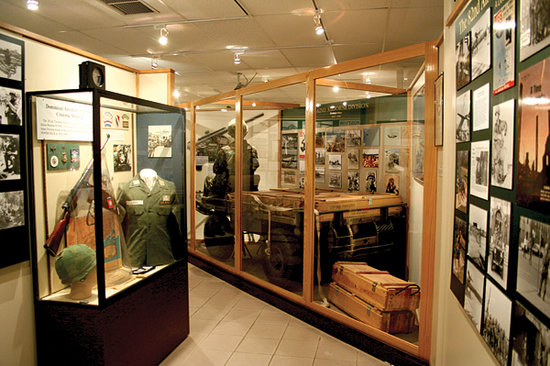 Small museum filled with great history on American on all wars starting in 1917. Small theater inside as well 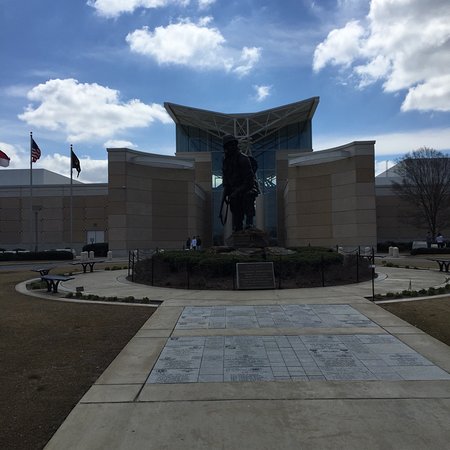 The doors opened on 16 August 2000, the 60th anniversary of the original Test Platoon’s first parachute jump. The museum offers free admission, a main exhibit gallery, temporary gallery, four-story tall theater, a gift shop, and a motion simulator ride that features two experiences. Admission is free, and we do accept donations in the gift shop and in donation boxes in the lobby. The main gallery is designed as a self-guided tour, in chronological order, through the history of airborne and special operations soldiers from 1940 to the present. The temporary gallery changes periodically and displays a myriad of exhibits pertaining to the United States Army airborne and special operations units through their history and conflicts from World War II to the present.

This place is amazing! If you give something infinite rating, this would be the place. Every high school kid or adult not ever exposed to some history about our airborne and SOG warriors should visit! 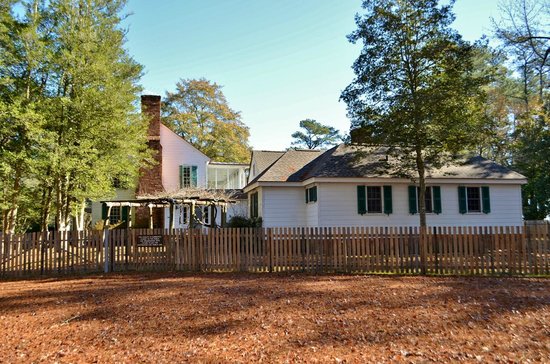 Carver's Creek State Park is a hidden gem among the development around Fayetteville and Fort Bragg. A little more than a half mile hike from the welcome center is a beautiful piece of property that transports you to a much earlier time in North Carolina's history. The property is more than a thousand acres of pine forest, cypress pond, and a plantation style home complete with a grist mill. Unfortunately, Hurricane Matthew caused severe damage to the property which, as of now, has not been repaired. I am sure that with the proper funding and development by the State, Carver Creek State Park could be one of the prettiest parks in the State. 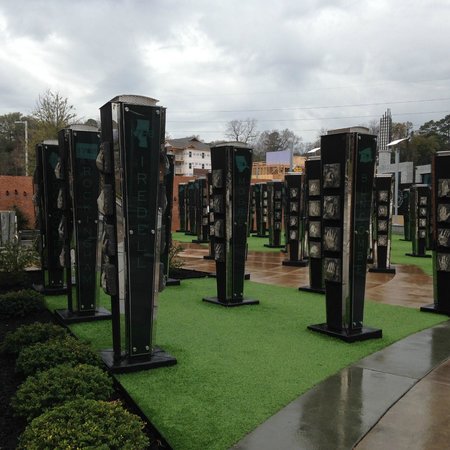 This is a newer Museum but if you have a chance walk on over there, covers the history of the veterans of North Carolina. And the grounds are very well kept. Its a sports bar that has everything. The first thing you see is the regulation boxing ring in the middle. It has Pay-Per-View Special Events, Pool Tournaments, Outdoor Sand Volleyball, Video Games matches, Seating for 360, Dancing, Live Bands, Karaoke and a Patio Bar.
Food and drink mainly focuses on pizza/pasta and a large beer selection 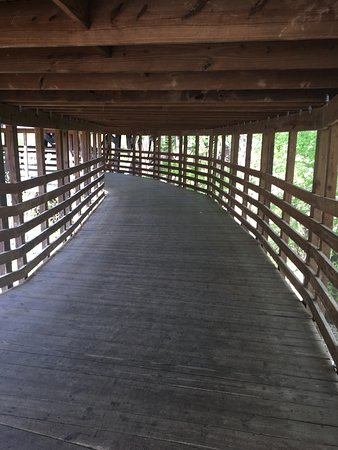 This trail is paved and used by both pedestrians and cyclists alike. Very peaceful and relaxing to walk along this trail. Covered most of the way but there are some areas where you are not under the trees so bring some sunscreen

I need to get back there again and do the trail. It's a moderately easy walk. 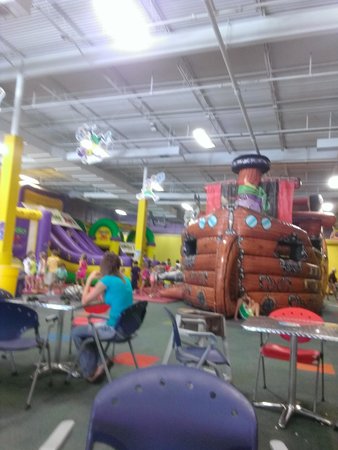 My family has visited Monkey Joe's several times. Being that there aren't many places for families with children to go in Fayetteville we seem to keep returning to Monkey Joes. Its not terrible but its not the the most exciting place to go either. Many of the children are unsupervised although there are several attendants working during business hours. Many of the employees appear to be disengaged or more interested in talking with each other. Otherwise the staff was very friendly. Children are running from corner to corner of this place. The larger children seem to always take over the inflatables therefore the smaller children don't have much to do. There is only one jump house for kids under 5. The snack bar is also disappointing. You cannot order a slice of pizza as they order out from a local franchise such as pizza hut or papa johns so you have to actually order an entire pizza. Its probably cheaper if you just order it yourself and have it delivered to the parking lot. I would recommend this place for 6 to 10 year old children. The entry prices are very reasonable. So its not entirely bad but I would not visit Monkey Joe's if there were other similar places in Fayetteville for families with small children. 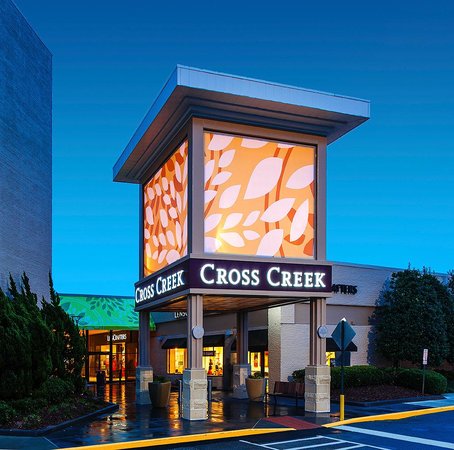 Cross Creek Mall features all your favorite stores including Macy's and JCPenney as well as more than 100 specialty shops such as The Disney Store, Aldo Shoes and Forever 21.

The mall is nice. The food court offers many choices of things to eat and drink. Other eateries are scattered through out the mall. Plenty of parking to get into the mall without walking a long distance. It was a great place for us to hike minus the heat and humidity of North Carolina. 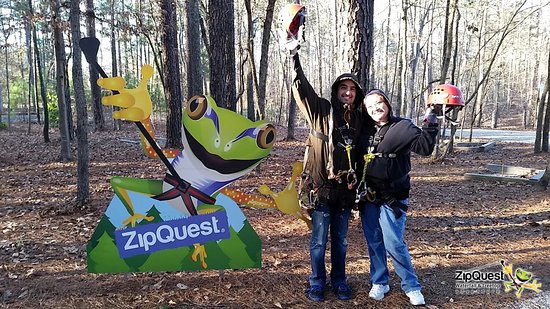 Named one of USA Today's 10 Great Zip Lines! ZipQuest is a world-class zipline tour and nature adventure in Fayetteville, North Carolina. Zip through the treetops and over the region's only waterfall. ZipQuest is one of the most thrilling activities in Fayetteville - great for family adventures, group activities, team-building retreats, and excursions from nearby Fort Bragg.

Spent a very pleasant Sunday afternoon here with the family, including 2 teens. Our guides, Lucky and Kayleigh, were great. The scenerey, especially by the falls, was beautiful. It is very easy to get to and there are plenty of places to eat, get gas, etc on the way out. If you don't like porta pottties you'll want to hit a restroom at a nearby establishment. They do have light snacks and drinks available for purchase. We bought a special they were running which included all 8 zip lines, the slingshot and a photo package. Word of caution with the pictures....these aren't professional pics. They're taken by your guides on a phone and some are done while moving so some turned out really great....some not so much. We were happy with it but just go in with the right expectations. The total with the special was around 275. It would've been around 400 to do all of this normally. As fun as it was, I cannot see paying 400. We felt the 275 was a good price point and value for what we did. Unfortunately, we had to wait for the other party for our tour to start which was about 20 minutes late. The other unfortunate part was they were a bit ....not our style. Can't control that, I realize, but it would've been nicer to just have our family go as 1 tour. They did have some things to keep us entertained while we waited like cornhole, frisbee and such. The slingshot was the favorite for 3 out of 4 of us and we all liked the ziplines. Online purchase, waiver signing and email reminders were all easy and convenient. We would definitely come back if and when they ran a similar special. 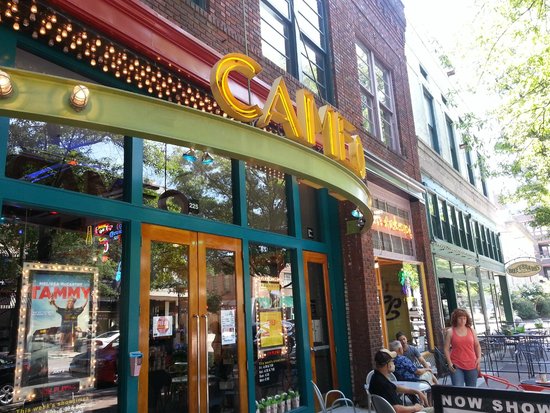 There are 2 theaters, one on the first floor and one on the 2nd. The features are usually artistic films. The theater is relatively small, compared to the main 3 theaters in Fayetteville, AMC's Marketfair, Patriot and Millstone, and have fewer showings per day. The matinee is reasonably priced and my favorite, even though still more expensive than the other 3 theaters. Beverages/snackscan be purchased inside the entrance. Recent films include Jackie, 20th Century Women - which did not show at the 3 major theaters and LaLa Land and Lion. You have to find street parking or park in the deck as there is no designated parking lot.