El Jadida (Berber: Mazaɣan, ⵎⴰⵣⴰⵗⴰⵏ, Arabic: الجديدة or مازاغان‎, Portuguese: Mazagão) is a port city on the Atlantic coast of Morocco, located 106 km south of the city of Casablanca in the region of Doukkala-Abda and the province of El Jadida. It has a population of 194,934 (2014 census). From the sea, El Jadida's old city has a very "un-Moorish" appearance; it has massive Portuguese walls of hewn stone.
Restaurants in El Jadida 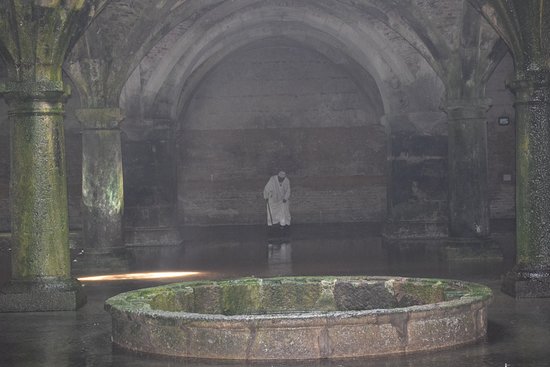 The Portuguese cistern reminded us a bit of the Basilica Cistern in Istanbul. It's an easy building to find as it's on the main drag though we managed to miss it when we took a wrong turn!! It's a beautiful structure accentuated by the graceful arches. There was a group there when we went down but we managed to keep a distance and in a sense maintain the serenity and peace of the place. Slightly creepy in dark corners but isn't that the joy of historical monuments? The pool of water on the ground and the reflection of the single shaft of light coming in from the ceiling brings out the startling and bleak beauty of the structure. Worth spending some time there. Above ground there was a small art exhibition. 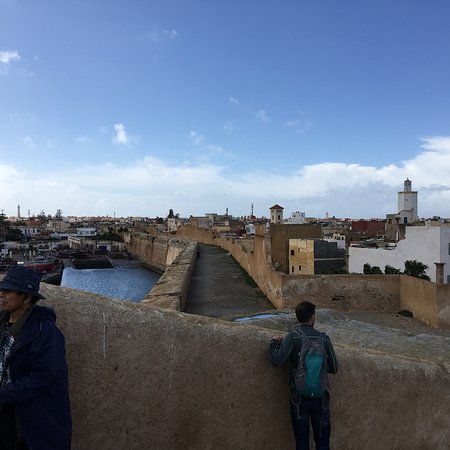 El Jadida is a dirty smelly place. The old town could be nice but often smells of sewage. Shops and restaurants are few and relatively expensive for Morocco. I did find a couple of nice cafes and restaurants but it cost a bit more than usual. Hotels looked good but were quite poor quality in reality. 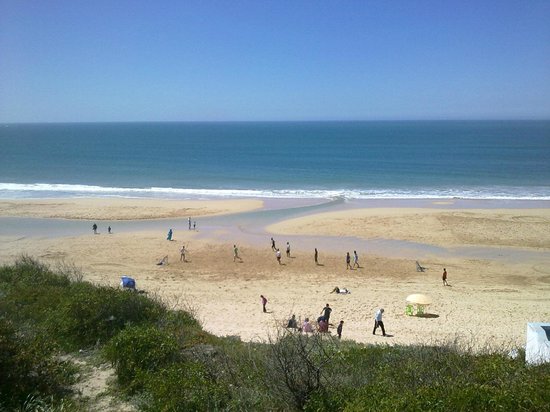 We have never seen a beach like this....it looked like a soccer field with hundreds of players in brightly covered shirts playing all over the beach...for as far as you could see! What a spectacle! 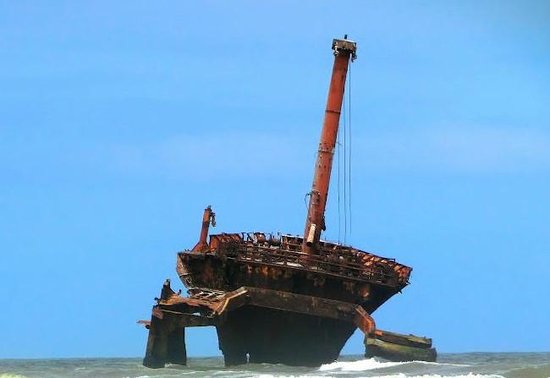 The town beach, Plage Deauville, gets really crowded, even during Ramadan. Although this is far further away, it more wild and rugged with fewer people to get in the way.
There are some facilities, such as the Parc Sondos, to get coffee and food. There are ambulant sellers too. This beach also gives an opportunity for a walk in the woods out to the Azemmour road, but only do that as a group of people.
The water's clean and refreshing. With a car, it is a no-brainer to come here for bating and sun instead of nearer town. 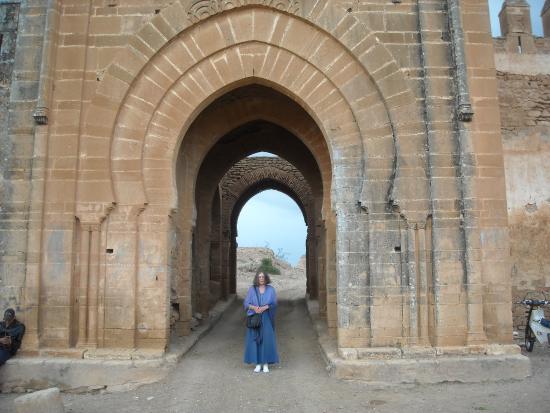 Kasbah Boulaouane is worth to visit. It is not so far from El Jadida or from Settat but you need the car of course to go there.
It is old Kasbah, but very nice and interesting to visit. It was built by Moulay Ismail in 1710 so now it is not so much left, but the wall around is almost whole, ruin of mosque and zawyia is still there. There is left also prison where I would not wish to stay LOL. From Kasbah it is beautiful view over river Oum Er-Rbia.
There is a knowledgeable guard who was very happy to show me the whole Kasbah, he told even about story a little.
The entrance was free but I gave him a little more than 30 DH and he was grateful for that, wanted to invite me to lunch. But I had a little hurry back to El Jadida so I thanked him only and leaving. 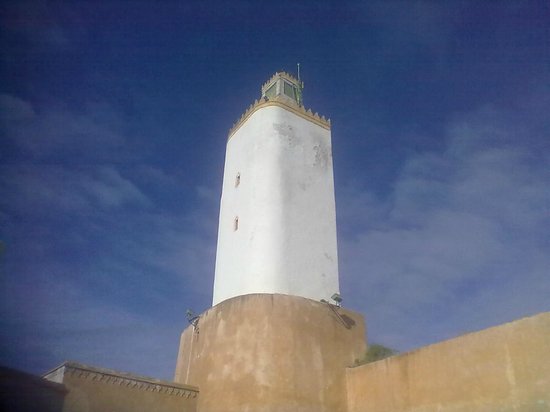 You can't go in, as is the case for all but 2 mosques in Morocco. However, the minaret makes a great backdrop for photos, especially as it is unique in Morocco in being 5 sided and that the "edges" of each side are rounded rather than being of conventional construction. I am informed that there are a couple of other minarets in the country which have more than 4 sides, but there are no other rounded ones.
Most people miss this mosque in their rush to the ramparts. It's worth the short detour to have a look. 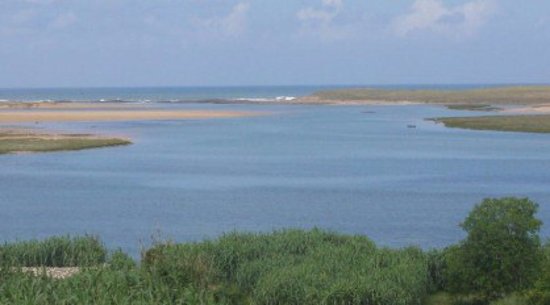 Reviewed By Saad A - Casablanca, Morocco

this lagoon is like a highway in the summer. between the fishermen, the taxi boats, the zodiac from surfland and all the people swimming in high tide, it's super crowded. However, it's super beautiful and this is what makes Oualidia beautiful 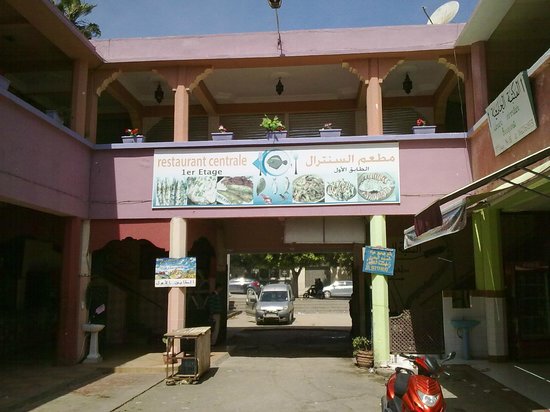 This is a colonial era relic from the French days, sandwiched between avenues Mohammed Errafi and Hassan ll.
I come here every so often to get vegetables and fruit that sometimes can't even be found in the supermarkets. It's just a rectangular, 2 storey affair with the main shops (meat, fruit & veg., pets, flowers, groceries) on the ground floor and some of the restaurants on the first floor. These latter are all grouped together at the avenue Hassan ll end and are mainly fish restaurants, some are on the ground floor too. There is a couple of specialist shops to buy souvenirs from and one of the few "épiceries" to sell alcohol in El Jadida. Get there before 8pm though or you won't be served any! There are shops on the outside frontage too, a couple of these are interesting and provide services that people might need.
On the ave Mohammed Errafi end, can be seen a group of women sitting around under trees in the shade. These are women who offer their services as maids for the day or for a couple of hours. Obviously, if anyone wanted this service, they would need to be comfortable with anyone they chose - I have found that the older women are generally more reliable when I have needed a maid at short notice and my own is not available.
One difference between this central market and the one at Casablanca is that the one in El Jadida is still open well into the evening - Casa closes down at about 2pm.
If spending time in El Jadida, then a look here can be taken as part of a walking tour round the town. The beautiful Park Hassan ll (formerly Park Spini) is nearby too. One might even be able to catch a French Institute film showing in the park's private cinema.
Or one could just buy some good quality fruit for the hotel room at one of the shops! 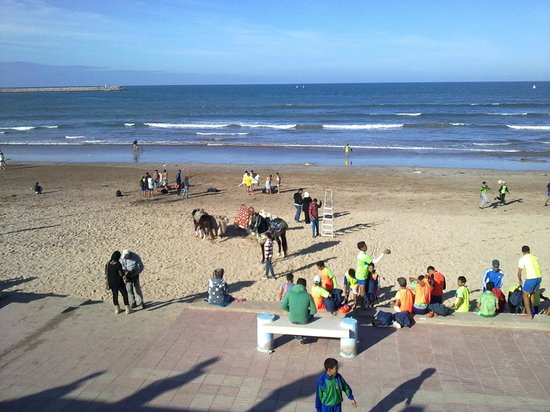 People often confuse Deauville Plage with Plage Haouzia. Deauville is the town beach, Haouzia is the beach that stretches from the end of town to the Mazagan Beach Resort.
The local authorities have spent money here. Gone are the jerry-built restaurants on the main Promenade, to be replaced by Gardens and palm trees. Cafés have been built at sea level on the lower Promenade as well as along from the Ibis hotel complex.
There's a peculiarly El Jadida phenomenon here, the small cabins that are rented out in the summer. These overlook the sea and are simply bare rooms, but there is a rush on them in high season and there are never enough to go round.
The beach is well kept and cleaned regularly in the summer months, less often in low season as it's not needed. It gets excessively crowded in July and August, but is far calmer and more relaxing outside of those months.
Parts of the beach are rocky and lads catch shrimps in the rock pools. In addition, the ruins of the El Jadida pier can be seen just along from the sea wall of the fishing port. Only the foundations are left of what was an impressive structure which once housed a casino. It was all part of the French effort to make El Jadida into a holiday resort like Deauville, hence the name of the beach. At the very end of the beach as it morphs into Haouzia Beach, can be seen the shipwreck of what must have been a considerably large cargo vessel.
Even in winter, this is worth a walk and a coffee. The bay is a real sight and many of the important buildings in the Portuguese City can be seen from the beach in the distance, making it an ideal spot for photographs. If it feels too windy, cold or hot, according to season, there are also restaurants and cafés along Avenue Nabeul 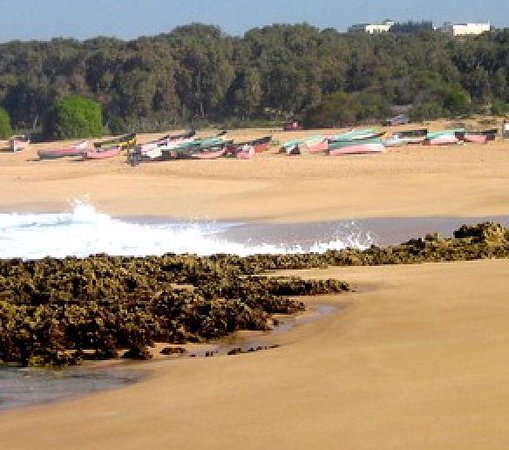 You need to take everything with you to this beach as it's quite isolated no shops so take food, water chairs etc you can hire a shack type structure or a tent for shade and park for a small charge lovely scenic quiet peaceful beach would certainly go again.