10 Things to Do in Ambalangoda That You Shouldn't Miss

Ambalangoda is a coastal town located in Galle District, Southern Province of Sri Lanka. Governed by Ambalangoda Urban Council, the town is famous for its ancient devil masks and devil dancers. It is approximately 107 kilometres (66 mi) south of Colombo and is situated at an elevation of 13 metres (43 ft) above the sea level.
Restaurants in Ambalangoda

We are a well established day tour operator in Sri Lanka who advises you in composing your unforgettable stay & we know every special spot & have traveled every corner of our beautiful country. Therefore you can be certain that you are in the best safe hands to organize wonderful day tours in Sri Lanka.

For our 8th international trip we choose Sri Lanka Ambalangoda as per recommendation from one of friend. Who also booked our tour with this company who arranged a wonderful trip for us every single thing was booked right before the trip. Which made us enjoy lot more as there was nothing to be worry about. No doubtly chamo tours is the best for there who's services is the best. I would 200% recommend travellers for this company going out there !!! 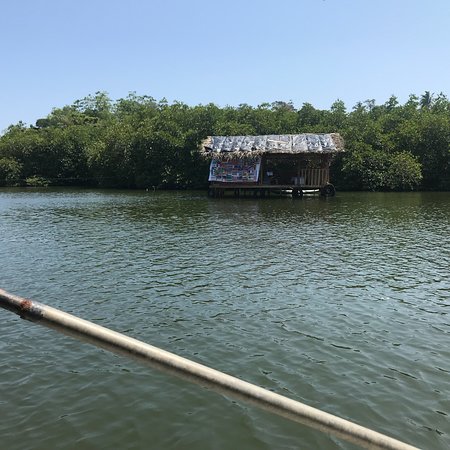 Madu River is a wetland, near the Small town "Balapitiya" along the Colombo Galle highway. This is the point where the Estuary of the Madu river. The river flows through a terrain where it creates a large number of Islands, and the eco system creates a beautiful wetland. The hotels around provide boat rids through the canals created at a good cost. And there are loads of places to stay, dine and wine.

We went on a half day River safari on the Madu River......river!!!!......more like a huge lake!!.......12 person boat with our friends from North Yorkshire, who we met at Riu Creole in Mauritius last February and a loopy bunch from Sweden and Norway.......amazing who you can meet on such trips......we had an absolute ball!!.....saw lots of wildlife including crocodiles, water monitors and snakes.......awesome as so close!!........visited Buddhist temple on a small island with lots of standing statues we had seen on This tours website........humbling to actually see them up close.........a real trip to remember our visit to Sri Lanka........a must do for anyone staying at the Riu Sri Lanka in Ahangulla 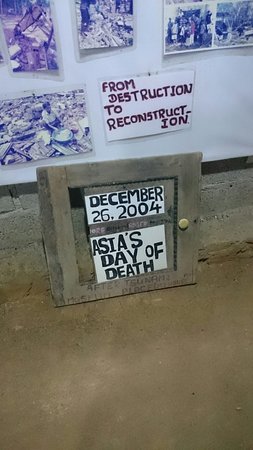 This was our third visit to the Tsunami Photo Museum and, again, a reminder of the terrible tsunami that struck that part of the Sri Lankan coast. Each time we go there, we gather more insight into the tragedy that occurred there, especially the estimated 2,000 who died in the train nearby on that fateful Boxing Day morning. 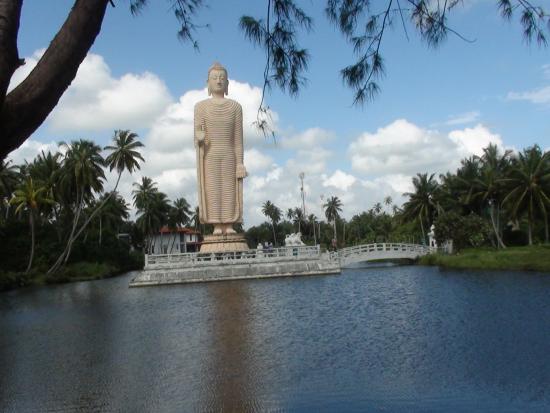 Community Tsunami Museum is aimed educating communities on Tsunami and preserve the memories of 2004 Tsunami. This museum is the continuation of the efforts of Third Wave Volunteers lead by Dr. Alison Thompson (author of The Third Wave - A volunteer Story and the director of Film Third Wave). This museum will take you a touching journey through science and history of 2004 Indian Ocean Tsunami.

Our guide book recommended this small place also because it was supposed to be free. When we entered, they informed us that there was a fee which we did not think was appropriate for what was offered. 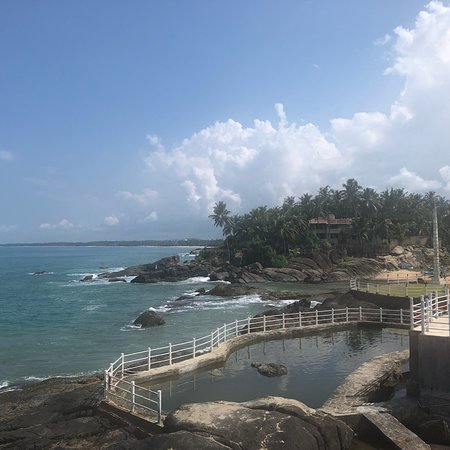 Beach is very very nice, only pure sand, easy and slow access to the ocean, so great for small kids and seniors as well. Ocean was very clean and not really cold. Nice place to relax, even without sunbeds and umbrellas - they are not there. But at the end of the beach is small restaurant and you can rent it there, they have couple of them. And in the same time you can use the refreshment from there. 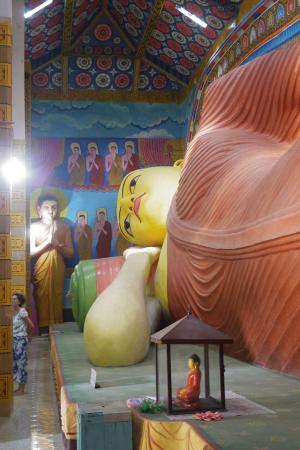 I have visited the Vihara on several occasions and was aware that it is the longest Buddha reclining statue in Southern Asia. There was a sign stating this fact. Now the monks are attempting to encourage foreigners to visit by falsely stating that it is the longest reclining Buddha statue in Asia. This is false as there are 11 statues longer the longest in the world being at Yiyang in China (416m long) which of course is in Asia. Several longer statues are in Myanmar which is also in Asia.
As a Buddhist I am disappointed that the monks have broken the precept of not lying in order to be greedy for money from visitors.
In order to enter the shrine room containing the statue one is charged 250 rupees (foreigners only) which the ticket calls a donation and in fact is an entrance fee. In the past one was encouraged to give a donation and I have done so in the past. I have visited many Buddhist sites throughout the world and this is one of the very few that charges an entrance fee. Several government controlled tourist attractions in Sri Lanka charge an entrance fee to foreigners but it is made clear that it is not a donation - eg Sigiriya and Temple of the Tooth.
I suspect that they would receive just as much money in genuine donations if it is made clear that they need funds to repair the shrine room. 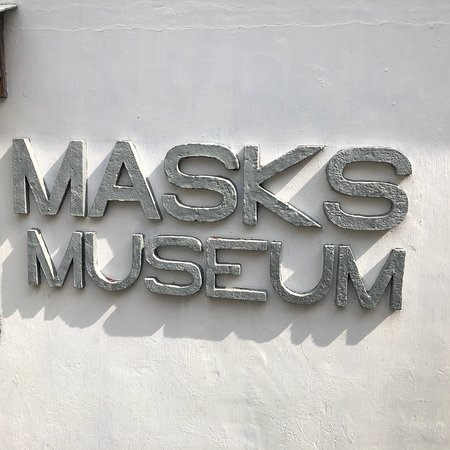 The mask museum does not have an entry fee, however you can give donation as per your wish. Sri Lanka has lots of fables which are performed using these masks and you will learn some stories behind several different masks which are made of wood. You can visit their store and pick up a mask as a souvenir. 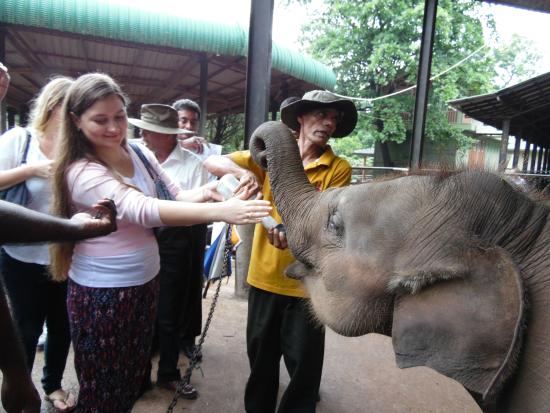 I have more than 15 years of travel experience leading tourists from all over the world in Sri Lanka. I can customise and plan trip based on your requirements, needs and interests. I speak English and Arabic . Email me to plan your exciting Pearl of Indian Ocean - Sri Lanka/

Anu is a great driver, guide and companion. He is very knowledgeable and interested in his visitors so he can tune the tour to better suit the clients. We've used Anu twice now and recommended his to friends who also had a great tour. Anu knows the island of Sri Lanka really well and the regional and seasonal fruits. He will pull over an rush off to get a specific fruit that is only briefly in season and in a very small area. We have a lot of friends and family in Sri Lanka and Anu has served us fruit that most Sri Lankans have not heard of.
Anu has a great attitude and believes that laughter cleans the blood, I think I agree.
He is very reliable, always on time (typically arrives early) and knows where to find local character and flavour away from the pricey tourist trail. He has a large and growing network of local contacts such as drivers and guides at National Parks including Wilpattu and Yala. Anu was our lucky leopard guy on our recent trip to Wilpattu, we saw a leopard on each of the 2 Safaris that he accompanied us (and no leopard the time he didn't come with us).
He is a great, safe, experienced driver and so much more. 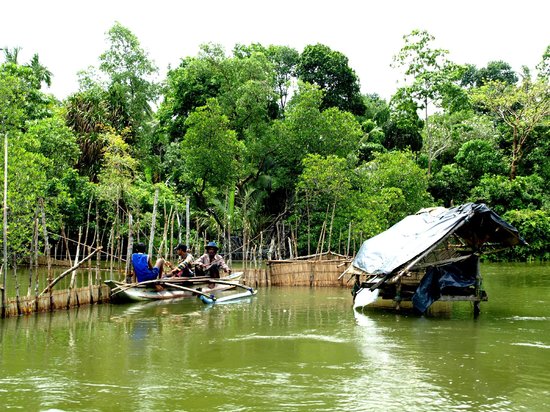 Whilst staying at Ceysands Hotel, my husband and I decided to do the Madhu or Madu river (Ganga) safari trip and it was just brilliant! It is a MUST-DO for any nature lover, with a rich ecology system full of mangroves, birds, trees and animals and reptiles. The Madhu river is a huge wetland protected by wildlife convention because of its biodiversity. We went with 'Santa' who has the tour shop on the right hand side of the road as you come out of the hotel gates. His prices are on a billboard so you don't need to get exploited by all the other rip-off tuk tuk drivers that harass you. We still haggled the price down a little (as you do in Sri Lanka). We paid Rs.3700 for both of us in total for the whole trip which included the tuk tuk ride to and from the river, the river boat safari and tour guide and a tuk tuk ride to a gem mine. The whole day was fantastic and a very worth while day trip that lasted about 5 1/2 hrs in total. You can also choose to visit the turtle hatchery too if you wish. In fact, Santa will customise your trip to suit you, but make sure with any trip you do in Sri Lanka, that you confirm prices first! The tuk tuk ride to the Madhu river took about 40 minutes, a lovely way to see the tropical surroundings of Sri Lanka. The river safari was about 3 hrs. The Madhu river had about 64 Islands in it but many of the smaller ones have now submerged. There are now just over 20 larger Islands and only about 15 of these are large enough to have habitants. The most famous of the Islands are the larger Kothduwa Island which is named after it's Buddhist temple and Cinnamon Island. The river safari starts near Balapitiya where it meets the sea, and you head up towards the Islands across a mass of water and lake where you will see a whole range of wildlife, there are over 100 different birds and cormorants, kingfishers, herons were everywhere and we saw eagles. There are many reptiles and crocodiles living in this river but we didn't see any crocodiles, just Monitor lizards and chameleons. The people living on this river make their living from fishing (and you will see areas across the lake netted off for their fish farms), and from cinnamon and coconuts...in fact it is famous for the Cinnamon Island where we stopped and watched a demonstration of how the cinnamon was peeled and dried, and enjoyed a complimentary glass of cinnamon tea. Then a demonstration of how the coconut husks were made into ropes, and baskets etc....a very interesting time spent! You can choose to buy (at very good prices) cinnamon oil and cinnamon sticks, powder. The other island we visited was the larger Kothduwa Temple Island. This is famous for its Buddhist Temple so remember to take a sarong or sari to wear to cover legs or shoulders if you want to go inside and if you can't bear the hot floor whilst barefoot, then take socks to wear too. It is a very important Temple as it was once known to have held the relic of the tooth of Buddha which is now in Kandy. There are a lovely long line of Buddha statues lining up which are still being built. There is a school near by and you can see just how happy and tranquil the way of life is here. The river also boasts a wide variety of trees and mangroves which the boat driver may take you in. We also saw monkeys and butterflies. It was a wonderful trip. After we went by tuk tuk to a gem mine where you can see how they operate, and if you wish, you can by gemstone jewellery at the shop. Yes, this is a tourist attraction but from what I saw in town shops, their prices were a lot cheaper...REMEMBER TO HAGGLE! I bought a little pair of sapphire earrings (with a certificate) for just £12 which was 40% off the original price, just show interest but start walking out if its too much...they will shout a better price which gives you something to bargain with. This was one of my husband's best day trips whilst in Bentota, definitely would do it all again!

After visiting the stone memorial across the road we stopped here to look at this beautiful statue and visit the small museum next door. Generously donated by the Chinese this statue represents the height of the 2nd wave that caused so much destruction in many peoples lives. To think what actually happened here on that fateful day certainly brings a lump to your throat and a tear to your eye.